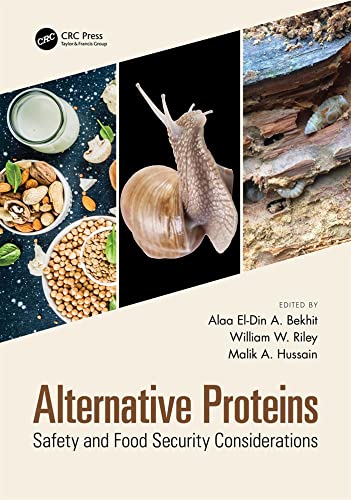 Zealand in 2004. His PhD research investigated the role of metmyoglobin reducing activity in the

maintenance of fresh meat colour. He obtained his MSc in Food Process Engineering from the

Dr. Bekhit is an Associate Professor at the Food Science Department, University of Otago, New

Zealand. He also holds an Honorary Distinguished Professor post in the Food Science and

King Saud University, Kingdom of Saudi; and Adjunct Associate Professor in Faculty of

Agriculture and Life Sciences, Lincoln University, New Zealand. He has been active in

studying meat quality and muscle foods for 29 years. He published more than 200 research

aimed at understanding composition, biochemistry, functionality and potential applications of

proteins from oilseed cakes, whey, blood, snails and wool. He also carried out several projects on

the quality of muscle foods and the processing of co-products such as animals offal and fish roe.

William W. Riley, PhD, was awarded his PhD in Nutritional Biochemistry from Cornell

University, his MSc in Exercise Physiology from the University of Tennessee and his BSc in

Physical Education from the University of Massachusetts.

Dr. Riley worked as a National Institutes of Health Postdoctoral Fellow in Biochemistry at the

University of Minnesota, in Austin, Minnesota. Since then, he has served as an Assistant Professor

in the Department of Food and Nutrition at North Dakota State University, a Senior Clinical

Research Associate in the Medical Department, at Ross Laboratories in Columbus, Ohio, and as a

Research Associate and Lecturer in the Department of Zoology, University of Manitoba,

Winnipeg, Canada. From 1993–95, Dr. Riley held the position of Adjunct Professor in the

Department of Food and Nutrition at the University of Manitoba while serving as Vice President,

Research and Development with the Canola Council of Canada in Winnipeg.

In 2006, Dr. Riley moved to China and assumed the position of Professor, Food Quality and

Safety in the International School at Jinan University. He has also worked within the animal feed

and veterinary pharmaceutical industries while living in Guangzhou and Nanjing, having served in

various technical consulting roles for Chinese and foreign companies. At present, he is serving as

Philippines-Diliman, and as Technical Consultant to a number of Asian and North American

Malik A. Hussain, PhD, is a food microbiologist and an active food professional. He holds a PhD

technology from the University of Agriculture Faisalabad (Pakistan) with distinction. He was

Research Centre, Canada. Over more than 20 years, he has worked on several academic, research,

In academia, he has extensive experience in food science teaching and research supervision at

policy and standards development. He was the former associate director at the Centre for Food

Research and Innovation (CFRI) of Lincoln University. Dr Hussain completed a variety of

industry-led projects on the development of functional foods (probiotics), food safety and

microbial proteomics. His research interests are to improve applications of probiotics through

understanding the microbial physiology and stress responses. He has published more than 100

scholarly documents in food science area and over 50 conference abstracts. He is the founder and

initiator of Asia-Pacific Probiotics workshops in the region. He is an executive director of Asia-

associations and sits on scientific committees of many international conferences and symposiums.